We believe that rape is a daily occurrence that cannot be changed. We believe women and girls provoke sexual assault with their dress and behavior. 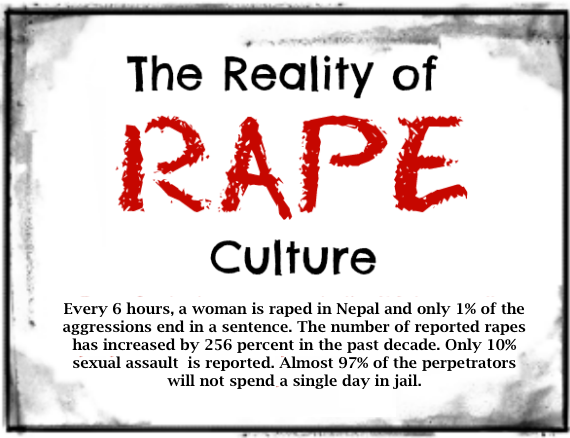 A film with the title ‘Culture of rape’ which premiered in 1975 drew attention to how the media and popular culture spread major and erroneous beliefs about rape. The culture of rape describes a social and cultural problem where rape is accepted and normalized due to thoughts, beliefs, behaviors and social attitudes about gender, sex, and sexuality. It includes social messages that focus on how older men and women assume predefined gender roles in relation to sexual behavior. Nonetheless, we live in a world where sexual violence is a common experience, especially for women, a society in which girls grow up afraid to walk alone on the street. Men are not the only ones who rape and neither are women the only victims – there are men who rape other men and women who rape men – but what makes men the most responsible is that 99% of the violations reported are committed by men and less than 1% are women.

Clearly, this type of sexual violence is often suffered by women and practiced by men. Every 6 hours, a woman is raped in Nepal and only 1% of the aggressions end in a sentence. The number of reported rapes has increased by 256 percent in the past decade.

Many rape cases never come to court and this is due to the traditional patriarchal culture. Let’s look at a few examples. The first example is that it is natural to give liquor to female friends in the hope of being able to engage in sex and when the female friend is unconscious, the act becomes part of the culture of rape. When mothers blame girls for posting sexy selfies and leading their sons into sin, when society believes that girls ‘allow’ themselves to be raped and when journalists substitute the word “sex” for “rape” – as if they are one and the same thing and we can call this, the culture of rape.

The most consistent behaviors and practices that create a culture of rape are acts of sexual assault, but there are others that also play an important role in creating this context. These include: sexual bullying in the form of bullying, harassment, intimidation and threats to women and girls. Denying that rape is a widespread problem, blaming the victim, accusing the victim of lying, sexual objectification of women and girls etc. also play a major role in promoting the ‘culture of rape’.

We believe that rape is a daily occurrence that cannot be changed. We believe women and girls provoke sexual assault with their dress and behavior. Rape is a social problem and we have to find the social solution.

Media should learn the proper difference between terms such as ‘known violation’, ‘date violation’ and ‘actual violation’ to make false distinctions about the crime of rape.

We have to stop using rape as a point of the plot and for economic gain in film and television. We need to avoid video games with rape scenarios and songs and music videos that glamorize sexual coercion as the culture of rape is mainly composed of behaviors and practices, the way we think about sex and rape, the way we talk about sex and rape and cultural representations of sex and sexual assault.

If the resolution of the government, which lightly intervenes in a rape case, is taken into account, the government becomes part of the culture of rape. In other words, we are surrounded by a social and cultural environment in which sexual violence is justified in various ways. Blaming the victim, treating people as things, and minimizing or denying the damage caused by rape are symptoms of a society that strengthens the idea that it is normal and natural for men to have aggressive behavior in sexual relationships. Such a situation would not exist if it were not a system. Police are one of the most corrupt government institutions in Nepal. Often police officers not only participate in concealment and neglect of crime, but are also involved in the crimes themselves. In the Nepalese patriarchal society, where women are subjected to tremendous pressure to comply with male rules, they remain silent. Those whose permission does not slack off are often punished brutally.

At times like this, women also need to create collective strategies, find ways out of fear. Women are taught not to trust another woman because of the patriarchal culture, and this ends up generating isolation. The women of our society need to build networks of strengthening and care, collectively in the form of women movement.

Gender education is another necessary measure for raising awareness about the importance of respecting women to be propagated and disseminated by future generations. Education is very important to face the patriarchal values that are settled early in the society of boys and girls. However, it is not a sufficient condition. To combat the practice of rape, we must transform the social relations of domination and exploitation of men over women. As long as we do not transform it, it will take a series of actions in the state, society and social movements to denounce and confront this violence against women.

Gender violence is a direct reflection of the patriarchal ideology, which explicitly demarcates the roles and power relations between men and women. As a byproduct of patriarchy, the culture of machismo often disseminated implicitly or surreptitiously, places the woman as an object of desire and property of the man, which ends up legitimating and feeding various types of violence like rape.

We are raised in a culture that requires a woman to remain clean until the wedding, and it is the same culture that raises the norm. It is believed that a woman should remain clean because her goal is to serve a man. Her body is intended for the creation of children and for a man’s pleasure. If we do not change our perception towards women, this problem will always stay as a problem and we will never be able to solve it.

(The author is a lecturer and IT consultant. He also writes fiction under the name of Kapeed Joshi. He can be reached by email at [email protected])